Investigation Into the Invisible World

Investigation Into the Invisible World

I finally found a decent copy of this excellent documentary on Iceland which features a lot of great LM stories, interviews with locals, mediums, healers and more, well worth watching (French Documentary with English subtitles):

It's also interesting to note that Iceland had a prohibition on alcohol from 1915-1989 which, along with a lack of EM pollution there during that time, probably resulted in the many sightings compared to now, not to mention their being so far away from the bad influence of the church, allowing them to keep a lot of their traditional knowledge much like the Outer Hebrides in Scotland.

The following video is more recent and another encounter with the Icelandic Elves or "Hidden People" as their are often called:

Finally, here is a reminder of Steve Alldale's story from the excellent Fairy Faith documentary, about almost having his shadow cut off by two LMs in the shadow of Schiehallion, Fairy Hill of the Caledonians:

Note how Steve now wishes he could have the encounter again but has failed to do so, probably due to his seeking it out instead of allowing it to happen.

I'll be visiting and climbing Schiehallion later this year, it's a very interesting mountain:

I also found this image on Geograph while searching for the image above, i'm sure many of you will recognise the triskelion shape and below that is a link another story from my Arran featuring the same thing, very intriguing: 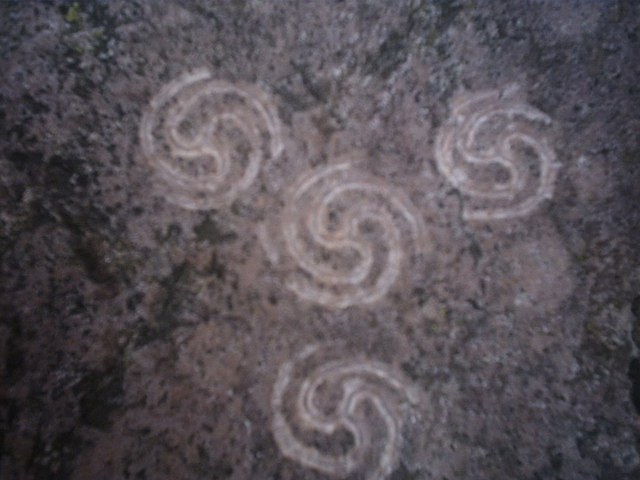 Rock Art or Vandalism?
Interesting little bit of 'art' at the summit of Schiehallion. I have subsequently been back up the hill a couple of times, but could not find it again. It was located a few metres to the west of the summit.

As if vandals would do anything as beautiful as this!

...her mother and father went at once to challenge this trickster, but on their arrival back at the scene, not a sign of him was to be had, save for some old starfish, some shells and some very white sand forming a TRISKELL on the ground………

Here is another triskell from the community woodland at Fairy Glen on Arran, on a rock next to another with a Celtic spiral and Norse runes, fascinating and well worth a visit: 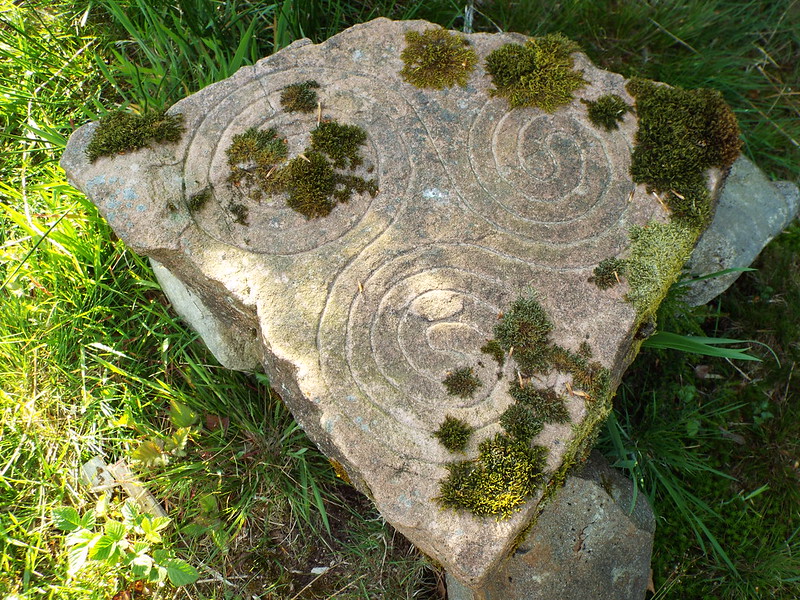 Is it possible that cup and ring marked rocks and celtic spirals signify a portal stone or similar? It's about the only explanation I can come up with, them being a key code or marker.

In saying that i'm aware of another portal in Edinburgh that isn't marked and I don't think the LMs would have any requirement to mark a portal and make it stand out. Could the marks perhaps be, along the lines of the seashell triskelion, be left as a result of an LM teleporting into the other realm, the twisting of space-time leaving a mark even on solid rock?
Jones: [looks at Sallah] You said their headpiece only had markings on one side, are you absolutely sure? [Sallah nods] Belloq's staff is too long.
Jones and Sallah: They're digging in the wrong place!
Top

djchrismac wrote: It's about the only explanation I can come up with, them being a key code or marker.

Watched the documentary yesterday, very good. Iceland seems like a fascinating country. A couple of guys on the radio a few days ago were laughing and joking about the Icelandic believing in Elves and Fairies. They were ridiculing the fact that they factor them into any planning permission. It is saddening me to think all this fascinating information is being passed of as a myth.

There was a triskellion key in the TV show Merlin, although I never watched it so I don't know what it actually did!

not sure how this html will appear = boooooooooo ;[

Thomas Sheridan has some very good refs to the symbols and the surrounding research very much inline with this topic.Do check out his other work.
thanks for the post guys!!and or Gals... oop !! no self-censorship here .I refuse to be politicly correct only honest ; ]

Thomas Sheridan discusses his book The Druid Code: Magic, Megaliths and Mythology. The Druid Code sets out to examine the wider concept of magic and mythology being utilised as an early form of social psychoanalysis by the druids, how magic theory developed from this, and how this evolution of ritual magic eventually made its way into Folklore, Witchcraft and Freemasonry. From the proto-shamanic world of the megalith builders, to lost civilisations of the Atlantic fringe, along with the continual changes and challenges to the human experience in the face of traumatic cultural upheaval, the druids and their legacy have played a far more influential role than has been previously acknowledged. The Druid Code utilises mythology connected to sacred sites, developing a bidirectional conduit back through time, to reveal what took place in 2500BC – a shift in human consciousness that made humans what we are today. Issues discussed include:
The true meaning and purpose of mythology.

Our pathological tendency to regard our ancient ancestors as inferior.

The power of symbolism to preserve and transmit archetypal ideas down the ages.

Does stone have a memory?

The effects of modern architecture on the human psyche.

Can radio waves and others beyond the spectrum of our five senses allow access to a spirit world?

From Atlantis to alchemy, you will never see history in the same way again.

Many more interviews at http://www.legalise-freedom.com

If you find this content interesting, please consider supporting my work with a donation http://legalise-freedom.com/make-a-do...

when science becomes the "religion" of the time[s] i suspect the place of worship or warship ; [ hahaha or NOT;) looks like this

Gopi at AQ presented the history that connected the dots for me ..thanks Gopi!
http://reciprocalsystem.org/video/ancient-architecture
a simple 90 degree horizontal view or perspective and the collider (temple) and the recent rituals begin to make the program[s] intent more visible.
Top

djchrismac wrote: It's about the only explanation I can come up with, them being a key code or marker.

Watched the documentary yesterday, very good. Iceland seems like a fascinating country. A couple of guys on the radio a few days ago were laughing and joking about the Icelandic believing in Elves and Fairies. They were ridiculing the fact that they factor them into any planning permission. It is saddening me to think all this fascinating information is being passed of as a myth.

It is very enjoyable and refreshing to watch. It's not surprising to hear of ridicule towards those who believe in the little people, I have experienced that first hand. An instant parallel to the locals advising the against the building of roads near certain rocks can be found in Ireland, a recent example being Eddie Lenihan who is amazing to watch and listen to:
http://www.irelandinpicture.net/2010/04 ... ennis.html
http://eddielenihan.weebly.com/multimedia.html


trippingthelight wrote:There was a triskellion key in the TV show Merlin, although I never watched it so I don't know what it actually did!

I've not watched Merlin but may check it out although I suspect it will just frustrate and annoy me, as does 99% of TV. Knowing our true history and then reading folklore and mythology from a different perspective is much more rewarding than any drama peddling (almost always) the official, inaccurate version of "history".

I will admit to having a nature documentary on in the background just now, for the relaxing animal/narration soundtrack, on a channel with no adverts. That's about the 1% that doesn't annoy me.

Andrew wrote:I saw a Dream catcher at work the other day and noticed the spatial pattern. It isn't precisely sacred geometry, but I'm guessing they have been passed down throughout history for actually being effective in altering bioenergetic fields. Keeping bad spirits away by... bringing order to a room?

Dream catchers are based on the phyllotaxis (the criss-crossing spiral patterns of flowers and leaves). Flowers exist at the junction between space and counterspace, so they are like a living connection between the Realms. (Might want to contact AnAncientAwakening as he is studying this relationship right now, in regards to herbals).


Andrew wrote:What about runes? Do they work in the same manner? I have a fair understanding of Elder Futhark.

Runes, outside of the actual written language, are a form of divination--a system that basically helps you see what the Universe is trying to tell you at the moment. Like most systems of divination, you should include the Odic rune (a blank one)--just in case the answer is "I can't tell you." (I would recommend the works of Edred Thorsson over Ralph Blum.)


Andrew wrote:Since these are all spatial structures affecting the cosmic sector, it seems they do "magickally" affect circumstances and probabilities without any kind of power source or magickal charge, like Reiki for instance.

Actually, these spiral patterns occur when space and equivalent space (the effect time has on space) intersect... space is linear and equivalent space is angular, so you end up with spirals, coils and vortices. Physically creating them does not infer any magical function, as you are just doing 2D/3D spatial manipulation. You have to either set up the environment to create them (like planting a flower garden, or placing rocks in a stream), or invest qi or shen into the system to activate it.

So stones with spirals, cup and ring marks could perhaps be a leftover of an intersection between space and equivalent space, much like the seashells of the Lochranza LM, leaving a mark when making the transition, be it on sand, grass or stone?
Jones: [looks at Sallah] You said their headpiece only had markings on one side, are you absolutely sure? [Sallah nods] Belloq's staff is too long.
Jones and Sallah: They're digging in the wrong place!
Top
Post Reply
6 posts • Page 1 of 1