Apparently the "Studiengesellschaft für Geistesurgeschichte, Deutsches Ahnenerbe" had a weekly almanac with a good amount of data sourrounding ancient civilizations and the formation of the solar system. I only found scans of one issue, dated January 1940, Berlin. What amazes me is that there is absolutely no mention at all on the internet about the weekly almanacs except for a few russian websites, all copying from a single source, see russian link below.
This particular almanac deals with the five primordial races, in chronological order they are: Angelic beings -> Hyperboreans -> Lemurians -> Atlanteans (Myrmidons, Autohons, Toltecs, Turanians, Semites, Akkadians, Mongols) -> Aryans.
(edit: The names of the races resemble very much those you see in Anthroposophy.)

In this time, the mainland of the earth on the side of the Pacific Ocean, that is turned towards the planet Nibiru, will be flooded, very fast, by the displaced water.

Here are the scans along with the transcripts. (as best I could decipher it)

I'm not sure yet when I get around to translating them, but until then you can read this russian text, roughly 30 pages, titled "Hidden report" from Anatoly Kopyov (Анатолий Копьёв), written in 2010. It contains a lot of information from the Jan'40 almanac and apparently from other issues as well. It also provides more details on the dates cited above, along with some info on the "list of kings" and other interesting stuff, curiously coinciding with a lot of things we are talking about in these fora. Here's the link for the google translation.

In 10,800 BC Ra divides the upper Mizra between Osiris and Seth.

Later Lemurians erected megalithic stone structures extant in Peru in England (Stonehenge) and other parts of the world, and also taught the basics of construction the "great teacher."

The basis of the construction was the principle of "cutting" hard rock and rock by enriching their transmute powder derived from the decay of gold at a temperature of 5,500 degrees C. With giant "pincers" Ba Jar classified as weapons "Gods", was carried out large-scale melting of gold in the ground construction and extraction megablocks. Thin gold plates superimposed on a mountain of rocks and within 70 seconds evaporated by electric arc. When the plate flashed a bright light and turned into powder, the stone can be cut as the clay and sculpt out of it any form. Gold, "refined by fire" as it was called the Aztecs, used when moving giant candy bars and stone platforms. The powder is sprinkled on the plate, then made some high-frequency sound and vibrations that are allowed to move the huge stone over the air platform. A similar method was used in the construction of the pyramids.

I found more on that:

Vajra As Weapon & Tool For Megalithic Construction: Secret Report On Soviet Expedition To Tibet
[...]
Blyumkin describes that, after undergoing a certain “initiation” procedure, having promised the Dalai Lama to organize large supplies of weapons and military equipment from the USSR on credit, as well as to help secure lending of gold to the government of Tibet, he was escorted by 13 monks to the underground on Dalai Lama’s personal order. A complex system of labyrinths and opening of secret doors exists there. To do it, each monk assumed a certain spot and, alternately calling out to one another, began to pull down in a special sequence large rings with chains hanging from the ceiling, by which large mechanisms hidden in the mountain opened particular doors. There is a total of 13 doors in the secret underground hall. Blyumkin was shown 2 halls. In one of them the monks keep the ancient weapon of the “gods” – the vajra – gigantic forceps with which in 8000 – 10000 BC leaders of ancient civilizations carried out large-scale vaporization of gold. It was done at a temperature equal to the temperature of the sun’s surface, approximately 6-7 thousand degrees Celsius. According to the monks, during the “vaporization” procedure, a few seconds of the following reaction occurs: the gold flares up in a bright flash and turns into powder. The ancient rulers ingested this Vajra powder with wine and food, thereby extending their lives by hundreds of years. They also used this power in construction. According to the monks, it indeed allowed the ancient builders to move gigantic monolithic blocks of rock in the air, as well as to cut and saw up hard blocks of stone and rock, erecting stone monuments and historical structures that are still standing today. (source)

In hope that there are any Russian lurkers frequenting this forum, I'd like to kindly request a translation of this chart (left one). It provides an overview of the various races:
(click to enlarge) 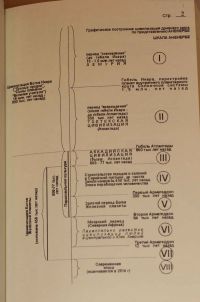 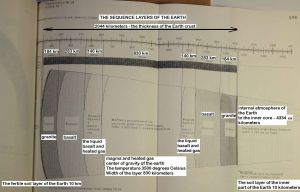 The chart on the right concerns the thickness of the various layers of the earth.
It's depicted on the same russian page (google translation) where I found the Jan'40 almanac. I found the translation of the chart elsewhere. There are also scans of a tibetan diagram on that page, which have already been translated.

And lastly, I found a map of Antarctica without the ice sheet as well as three ocean floor globes.
(edit: I put the maps in my starting post of the Bargos Islands thread.)


edit2: I probably won't translate anything at all, there is good reason this is all disinformation (though there are many bits of truth in it). Here's a quote from another thread that might fit in here as well.
Top

Interesting research animus, will follow developments on this..
In rapport we thrive, in rivalry we strive.
Top
Post Reply
2 posts • Page 1 of 1