I wonder what those Starlink satellites are really up to? 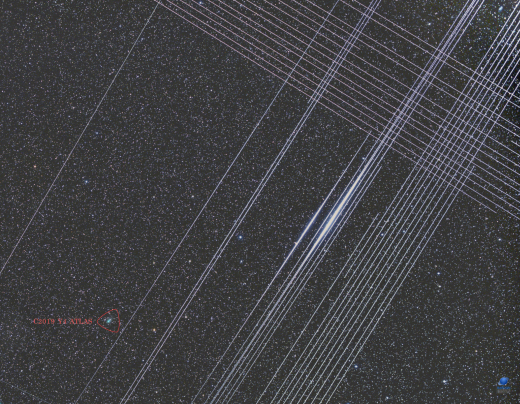 "I was trying to photograph disintegrating Comet ATLAS (C2019 Y4)," says Bardon. "My local night sky suffers from light pollution, and stacking of multiple exposures is necessary in order to image the comet. Unfortunately, I had not considered the trajectories of the Starlink satellites, and many of my exposures were contaminated."

This is the latest illustration of a growing problem. To date, SpaceX has launched 360 Starlink satellites -- with more than 12,000 planned. These satellites are showing up unwelcomed in so many images of the night sky, we now have an entire photo gallery devoted to them.

The whole situation reminds Spaceweather.com reader Peter Tarr (Chief Science Writer at the Brain & Behavior Research Foundation) of classic science fiction. "For those old enough, Bardon's astonishing image of the cross-hatch pattern made by Starlink satellites is the coming-to-life of 'The Tholian Web' of the original Star Trek series."

"Only problem is, it's not the Enterprise that's caught in Elon's Web; it's Earth-based observational astronomy!" he says.

From the growing problem link above:

Understanding the Impact of Satellite Constellations on Astronomy
In June 2019, the International Astronomical Union expressed concern about the negative impact that the planned mega-constellations of communication satellites may have on astronomical observations and on the pristine appearance of the night sky when observed from a dark region. We here present a summary of the current understanding of the impact of these satellite constellations.
https://www.iau.org/news/pressreleases/detail/iau2001/

I'm glad I never splurged on a massive telescope but it begs another question, what are they really up to and/or hiding up there? Soon amateur astronomers will struggle to get unobstructed shots of the Moon and more from Earth. Are they creating a large network of defense satellites to keep us in check or keep something out there from reaching down here?

I am aware that is a long exposure shot but 12,000 is a lot of satellites and astronomers are not happy about this. The official story is this is to bring high speed internet to remote rural areas. Seriously? The last time I checked, remote tribes of humans had no use for high speed internet and live remotely to escape technology, not have it beamed down to them from above.
Jones: [looks at Sallah] You said their headpiece only had markings on one side, are you absolutely sure? [Sallah nods] Belloq's staff is too long.
Jones and Sallah: They're digging in the wrong place!
Top

Re: Starlink, AI and Starfleet


Regardless of how genuine the lasers are in the second video, i'm now watching this interview and it just seems very out of place to me. It got me thinking, Elon Musk is just a creepy public front, the new NASA, nothing he says makes sense as he stumbles from uh one uh sentence to uh another, before sprouting a few figures and talking utter nonsense most of the time, with his shifty eyes looking all over the place as if he is just making it up on the spot, which he likely is:

At one point, 31 minutes in, after saying designing a rocket or satellite is a peace of cake "just read a book and do some maths" he then comes out with this:

"We brought up the Starlink production before the design was finalised... you're making a thing that you know is wrong, to figure out how to manufacture it." - Does this make any logical sense? Yes you reiterate a design but you do not start making something knowing it is wrong and just figuring it out as you go, you at least have a solid final design that you then tweak throughout the process, especially when it comes to the danger of travelling in space (or the upper atmosphere).

Some more points from the chat, taken from twitter:


Musk: Designing a rocket is "a piece of cake." The hard part is producing it and launching frequently.

Rapid reuse is essential. Not like the Shuttle, whose turnaround was slow and incomplete.

Musk: the creation of the Space Force is cool. It makes sense there’s a branch for every domain

Musk: we can make Starfleet real but we have to make radical innovations. We won’t get there with expendable rockets

Musk: US has to create breakthrough innovation , incremental is not good enough

Musk: US has to innovate or it will be second in space. How ? Reusability is extremely fundamental for assured access to space

Musk: vehicle we’re working on #starship is the holy grail which is full reusability

Musk: it would be good to have other companies develop competing reusable vehicles like Starship . He mentions the F-35. Would be nice to have competition ... hmmmm

Musk: volume production and volume launch of a reusable system is super super hard. Not reusable like the Space Shuttle. Has to be agile like an aircraft. Shuttle too expensive

Musk: Starlink satellites are being produced faster than we can launch them. We need Starship for launch costs to come down

Musk: in the next five years one of the most transformative technologies will be AI . I tell young people to study computer science and physics

Musk says SpaceX will need to use Starship to launch the full Starlink constellation rapidly.

On satellite design, Musk says it's important to blend design with the manufacturing process. "We brought up the Starlink production line before we had the design finalized."

Musk: When you have assured low cost access to space other technologies will be enabled. Many things are possible once the transport problem is solved . Establishing a self sustaining base on Mars opens opportunities

Musk: the future of air warfare is in autonomous drone warfare. But we still want to retain authority with a person in the loop. The fighter jet era has passed

Musk: how do we protect our IP at Tesla? We don’t . We have open source patents . IP protection is done by innovating rapidly and staying ahead of competitors

Musk: China has a lot of smart hard working people. They’re going to do a lot of interesting things. China’s economy is going to be at least twice or three times the size of the US economy

Musk: in order for US to be militarily competitive with China we need radical innovation. At SpaceX we have an incentive structure so big mistakes don’t come with a big penalty but not trying is worse

Musk: final message to #AWS20 ‘we have to make starfleet happen’ while we’re still alive. Try to make it happen ASAP

This is what is really scary though:

Billionaire SpaceX founder Elon Musk is known for pioneering disruptive technologies like reusable rocket ships and electronic cars, but during an appearance Friday at a conference on the U.S. Air Force, he was disruptive for other reasons.

During a fireside chat at the Air Force Association’s Air Warfare Symposium, Lt. Gen. John Thompson, who leads the Space and Missile Systems Center, asked Musk whether he had any innovative ideas about how aerial combat could be revolutionized.

The answer was less whimsical than what was probably anticipated.

Hushed murmurs and laughter rippled across the audience.

“OK. Let’s go back about failure,” Thompson said, changing the subject back to the early days of SpaceX.

Musk’s answer was hardly an original one. The Air Force and other military services have been embroiled in a decades-long debate about the balance of manned and unmanned technology, and how future leaps in artificial intelligence could both enable and complicate the rules of engagement on a battlefield.

But the discussion — and Musk’s willingness to go off script — highlighted a still-apparent culture clash between the more conservative, risk-averse Air Force and the dynamic, freewheeling commercial space industry, even as the Defense Department stands up the Space Force and casts an eager eye on a space-technology boom.

Much of what Musk talked about with Thompson lined up with typical Air Force talking points: The SpaceX founder encouraged young airmen to study physics and computer technology, saying both disciplines have “very good predictive power.” He predicted that AI would likely be the most transformative technology to emerge over the next five years. And he urged the service to take big risks to get “radical outcomes.”

But sometimes, things got weird. At one point, smooth jazz started playing, leaving Musk and Thompson struggling to talk over the bleating of a saxophone. At another, Musk compared low-cost access to space to the construction of a railroad that could safely bring travelers to the West Coast without the risk of calamities that could force those making the journey to eat their compatriots.

Also at the event, Musk praised competition during a discussion on reusable rockets, which SpaceX is developing.

“Not to cause controversy, but in my opinion, the Joint Strike Fighter — there should be a competitor to JSF. I know that’s [a] controversial subject,” he said, referring to Lockheed Martin’s F-35. Lockheed beat out Boeing in 2001 for the JSF contract, but the downselect and the cancellation of the F-22 program left the Defense Department with no other fifth-generation alternative to the F-35.

Unsurprisingly, Thompson did not follow up on that point.

“We’ve got to make Starfleet happen,” he said as the audience applauded. “We want real big space ships that can go far places. And this will probably get me into the most trouble of all: I think there should be a new uniform.”

“When the public thinks about Space Force, that’s what they think,” he added. “We want the sci-fi futures, the good sci-fi futures, to be real. And, ideally, to become real while we’re still alive.”

I look forward to seeing the fake CGI bases on the Moon and Mars when it comes round to it, since they STILL haven't figured out how to get past the Van Allen belt.

Madness. With people believing someone like this is genuine I worry about what our future holds, especially when it comes to AI.
Jones: [looks at Sallah] You said their headpiece only had markings on one side, are you absolutely sure? [Sallah nods] Belloq's staff is too long.
Jones and Sallah: They're digging in the wrong place!
Top

One thing comes to mind from Stargate SG-1 episode, where Daniel was being taught in a dream by Harsises child. In the dream he got humans to build a Goa'Uld technology satellite array that enveloped the whole Earth and of course said that it would defend against any Goa'uld attack from space, but then some nations didn't agree with the whole thing and Daniel destroyed Moscow with that beam weapon from space. If memory serves the episode was called "Show and tell".

Another thing is that it might be new kind of shield from radiation and other particles from space, because of EM fields. Perhaps planes are going to stop spraying chemtrails, but still things are getting worse because of those satellites, when they finally get all of them up there. If there are faulty ones they can always make them crash back to earth or more controlled crash into someones house who is unwanted and of course blame it on some random meteor.

Regarding Musk speaking like he doesn't know what to say, maybe he had been smoking too much weed that day. I remember in some internet pictures and discussions he was seen smoking weed and has admitted that he smokes marijuana. Forgetfulness is one symptom of that and if you dont remember your lines then make something up.
Top
Post Reply
3 posts • Page 1 of 1